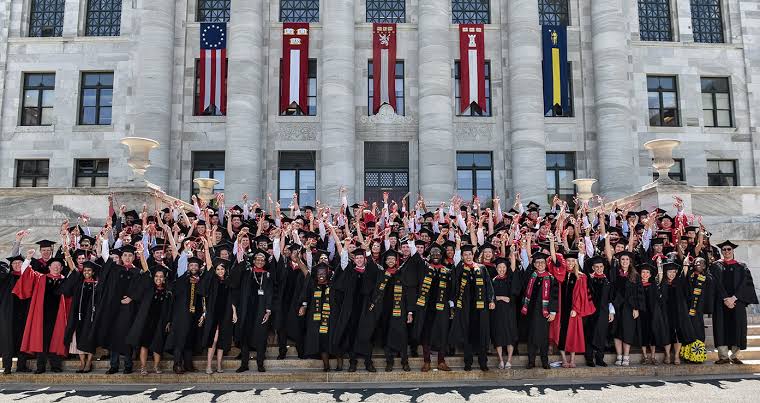 Nigerians make 46 out of 97 Harvard medical graduands, setting educational tourism record
Despite the negative headlines generated by some elements on Nigeria recently, there are still some very good reasons for the country to keep heads up high. This is with the laurels and achievements by Nigerians in educational pursuits abroad.

This is contained in a recent publication by euroafricanews.com and proudly corroborated by Chairman and Chief Executive Officer of National Diaspora Commission, Abike Dabiri on her social media page.

According to details of the post, the prestigious Harvard University graduated 97 medical doctors with 46 of them being Nigerians.

According to Dabiri “This news did not go viral because it was no crime! We still have reasons to make good news”

Reports further showed that out of the 27 awards of excellence given at the prestigious institutions graduation ceremony, 16 were claimed by Nigerian graduates

Many believe that Nigeria is truly blessed with a crop of young, vibrant and talented minds that continue to exhibit excellence in any part of the world where they find themselves.

Another case cited by Dabiri was the case of 46 Nigerian students, who recently made the bulk of the 96 medical students that graduated from the prestigious Howard University in the United States of America (USA).

In her words: “Even more interesting is the fact that out of 26 awards of excellence that were given out at the institutions graduation ceremony, 16 were claimed by hardworking and well-deserving Nigerian students” Abike Dabiri-Erewa added excitedly

Ms Abike Dabiri–Erewa was appointed in November 2018 by President Muhammadu Buhari as the first chairman and chief executive officer of the National Diaspora Commission. Ms. Dabiri-Erewa, was a member of the House of Representatives representing Ikorodu Federal Constituency in Lagos from 2003-2015.

Recall that Then Acting President Yemi Osibanjo signed the Nigerians in Diaspora Commission Establishment Bill into law in July 2017, a development that was widely welcomed as giving teeth to the government’s self-professed desire to partner its citizens abroad.

This laudable feat has been greeted with excitement across Nigeria which is undoubtedly from available records as having the highest record of blacks doing exploits abroad especially in the academics ,medical and technology.

The recent negative branding of Nigeria had re-echoed with the FBI and Dubai widely reported arrest of some online fraudsters led by a popular Hushpuppi thereby dragging the name of the country into disrepute.

According to experts and positive minded Nigerians in response to the news of the Harvard graduates, the flag of the country will still fly high and restore the pride of the giant of Africa.

Many are however accusing international news platforms of bias and reportage of negative stories on Nigeria and ignoring laudable news as this from hitting global tabloids and platforms.