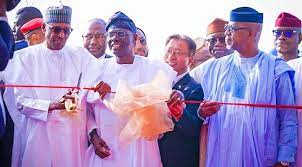 Buhari arrived at the presidential wing of the Murtala Muhammad International Airport, Lagos on Monday at 3:33 pm, aboard Nigeria Airforce aircraft after a disappointing outing at the All Progressives Congress (APC) Presidential rally in Bauchi State.

He subsequently left for the commissioning of Lekki Deep Sea Port, in Lekki and arrived at the venue at exactly 4.25 pm and headed straight for the official commissioning site.

Buhari was received at the airport by Governor Babajide Sanwo-Olu of Lagos State. Also at the airport to receive him was the Ogun State Governor, Dapo Abiodun.

A brief ceremony was held at the airport, where the president inspected the guard of honour.

In his remark, while welcoming the Nigerian leader, Babajide Sanwo-Olu Sanwo-Olu said the project is a massive infrastructure that will, directly and indirectly, create job opportunities for residents of the state.

Newsflash Nigeria understands that the event tagged ‘Lagos Festival of Projects Commissioning’ by Sanwo-Olu will run from Monday, 23rd, to Tuesday 24th, 2023.

The Lekki Sea Port project is said to be the largest in Nigeria and Sub-Saharan Africa. The multi-purpose Deep Sea Port promises to offer enormous support to the burgeoning commercial operations across the country and the entire West African region.

Upon his arrival in Lagos today, President Buhari briefly inspected the infrastructures the governor Sanwo-Olu administration put down and the projects to be commissioned.

Elated with the President’s presence in the state and the completion of the project under his administration, Governor Sanwo-Olu said the Lekki Deep Sea Port is a total combination of the efforts of the Federal Government, Lagos State Government and the private sector.

“The project is a total combination of efforts of the Federal Government, Lagos State and the private sector, and we are happy that this is happening in your time.

He added: “So, it is a massive infrastructure, and we are indeed excited that something fresh has been impacted into this country, and it is going to generate thousands and thousands of jobs directly, and hundreds of thousands of jobs indirectly in the entire ecosystem and this is your own project, and we are excited.”