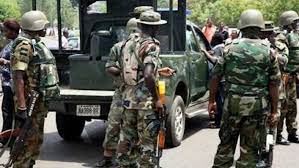 A Nigerian soldier attached to the Forward Operations Base (FOB) in Galadi, Shinkafi Local Government Area of Zamfara State has been arrested for selling ammunition and military uniforms to armed bandits in the state.

The soldier identified as Bala Nura (19NA/78/3870) was arrested by the military police on Wednesday.

Sources said Nura confessed to selling 100 rounds of 7.62mm special each to the terrorists at the rate of N100,000.

He was also caught with 1,000 rounds of the same ammunition which he promised to sell the gunmen for N1 million.