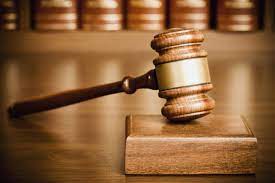 Zheng is the Interpreter and Sales Manager of Hand in Hand Industry Nigeria Limited.

Justice Olugboyega Ogunfowora of the Igbesa High Court on Wednesday ordered that the top officers be detained at the Ibara Correctional Centre, Abeokuta until the property of the Chinese man is returned.

In his judgement on June 9th, 2020, Justice Ogunfowora ordered release of the applicant’s international passport with No.EB4555829.

The Justice argued that the refusal to release the passport and also pay the fines as ordered by the court is contempt which is punishable under the Nigerian Constitution.

In his judgement, Ogunfowora ordered that the officers be kept in custody until the applicant’s international passport is released.

Speaking with newsmen after the judgement, the counsel to the applicant, Seun Akinbiyi, SAN, commended the court for the pronouncement.

Akinbiyi added that such a judgement will make people believe in the judicial system as the last hope of the common man.

“It is very significant that this is being done for the courage of the court, his lordship, and it is good for the sanctity of the court. We are very happy about that.

The Senior Advocate of Nigeria added that his chamber will see to the implementation of the judgement to the core.

“By the grace of God, we are going to see it that the order is carried out. That is the imprisonment of the AIG and the Superintendent. We will see it to the end.”

The Chinese national, however, expressed his worry over the case which has dragged on for over two years.

Zheng said, “I just want to say I win the case. Superintendent of Police, Tijani Taofiq refused to return my international passport in 2020. I am not happy with it.”