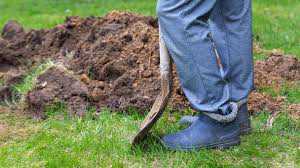 A man in South Carolina died from a heart attack as he was digging a hole in order to bury a woman he had just killed, according to police.

Edgefield County police arrived at a Trenton home following reports of an unresponsive male lying in his yard on Saturday, May 7.

When officers arrived, they found the body of Joseph Anthony McKinnon, 60, who lived at the home, according to The News & Observer.

During their investigation, police found another body, later confirmed to be that of 65-year-old Patricia Ruth Dent who lived with McKinnon, in a freshly dug pit, the outlet reported.

An autopsy later showed Dent had been strangled and police said they believe McKinnon killed her in an attack.

An FBI Uniform Crime Report said there were 549 murders in South Carolina in 2020—the fifth-highest homicide rate among states that year. It added the murder rate was 10.5 of every 100,000 people in South Carolina.

According to The News & Observer, police said in a statement: “Mr. McKinnon then bound her and wrapped her in trash bags before putting her in the previously dug pit.”

McKinnon was partway through filling the hole when he had a heart attack, the outlet reported.

His relationship with Dent is unknown at this time.

There have been numerous cases in the U.S. recently where women have been strangled to death.

Earlier this year, a man who was recently released from jail allegedly killed a mother while they were on a bus in Phoenix, Arizona.

Joshua Bagley is accused of having strangled the 41-year-old woman just 72 hours after he was allowed to walk free from the state’s Maricopa County Jail.

According to ABC 15, Bagley was only released because of a “litany of mistakes and miscommunication.”

In another case this year, a California woman allegedly strangled her aunt to death during an argument over cleaning their home.

Elizabeth Memea, 32, is alleged to have choked her aunt Leticia Hernandez, 52, to death at their home close to Castle Park High School in Chula Vista.

When police searched the home, they found Hernandez’s body under a pile of clothes in her bedroom. She had sustained minor injuries to her face.

Lt. Dan Peak said: “During the argument, Memea then attacked Hernandez by choking and eventually killing her.”

Memea was later arrested at the home and booked into the women’s Las Colinas Detention Facility in Santee on suspicion of murder.