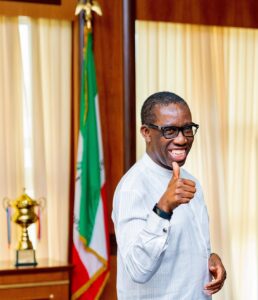 Governor Ifeanyi Okowa of Delta has expressed shock and grief over the passing of a former Acting Governor of the state, Rt. Hon. Sam Obi.

Obi, who hails from Ute-Okpu in Ika North East Local Government Area, reportedly passed on in the early hours of Saturday, a few days to his 60th birth anniversary, after a brief illness.

In a statement by his Chief Press Secretary, Mr Olisa Ifeajika, in Asaba, Okowa commiserated with Deltans, the people of Ika Nation and Ute-Okpu community in particular, over the demise of the renowned politician and pastor.

He stated that the fallen former lawmaker, who was Speaker of the state’s House of Assembly and Acting Governors in November, 2010, was a great patriot and leader who led with the fear of God.

He stated that because of Obi’s love for God, he founded the Oracle of God Ministries Church where he ministered the word of God with passion until his heavenly call to be with his maker.

The governor said that the deceased would long be remembered by the people of Ika North East for his contributions as a Councillor, Council Chairman and representive of the Constituency in the state legislature, adding that his role and wise counseling would be missed by his political family and Ika nation.

He said that Obi was a dependable political ally, whose commitment to the attainment of Stronger Delta laced with unity and peace was infectious and grandiose.

According to him, needless to say that my brother and chum, Prince Sam Obi, will be sorely missed.

“On behalf of the government and people of Delta, I mourn the passing of our beloved brother and former Acting Governor of Delta, Rt. Hon. Sam Obi.

“He was a very peaceful man who loved his people and served them to the best of his ability.

“As a minister in the temple of God, Prince Sam Obi served the Lord by preaching the gospel of Christ and shepherding His flock until his demise.

“As a former Speaker and Acting Governor, he will be long remembered for his contributions to the growth and development of the Ika nation and Delta.”

Okowa prayed to God to accept the deceased’s soul and grant fortitude to the family and friends he left to bear the loss.

Court orders sale of Lekki Apartment in favour of Ecobank

Court orders sale of Lekki Apartment in favour of Ecobank