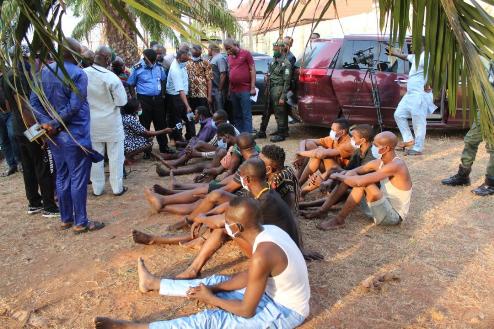 As a follow up to the case of kidnapping of 39-years-old female, Joy Osameze abducted on her way back from farm at Abraka Farm Reserve Obiaruku, the Delta State Police command arrested five suspected kidnappers and ritualist in connection to her case.

READ ALSO: How policeman who stole rifles was arrested

The suspects are Emmanuel Ojibe, Osam Ogolime, Ossai Reuben, Odigili chukwutem and Ukpaka Confidence were arrested with human parts suspected to be that of Joy Osameze stacked .A statement signed by Delta State Police Commissioner, Ari Muhammed Ali made available to Urhobotoday.com disclosed that on interrogation, Razaq Ifamaye who confessed to the crimes led Police operatives attached to Special Anti – Kidnapping and Cyber Crimes squad to Shegelo Beach, Obiaruku where a Baco Bag containing human skull and other human parts suspected to be that of the victim was recovered.

According to the statement, “One Chikogwu Isaac A.K.A Ikukwu, ‘m’, 38yrs, a native of Obiaruku whose premises the exhibit was found, instigated four others who are now at large to attack the operatives in order to prevent/obstruct the operatives from making the recovery.
“He was however arrested and the human remains were taken to the Agbor General Hospital for autopsy. Investigation is ongoing.